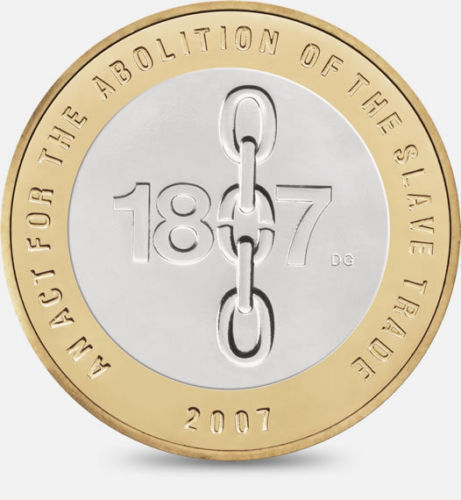 Add to your collection by seeking out an 1807 slave trade £2 coin. The coin was released in general circulation in 2007 and all coins are from this year.

The coin was released to commemorate the 200th anniversary of the passing of the Slave Trade Act in 1807, although slavery was not fully abolished until 1833.

The front of the coin depicts the date 1807 with the 0 formed from broken links of a chain. Surrounding the design on the coin, youll see the full title of the UK Parliaments Act An Act for the Abolition of the Slave Trade.

All of these Slave Trade £2 coins were made in 2007 and 8,445,000 were minted so it is not a very rare coin that youll have to fork out a lot for. The front of the coin was designed by Ian Rank-Broadley and the reverse by David Gentleman. Around the edge, youll see the inscription AM I NOT A MAN AND A BROTHER.

Coins are more rare and desirable if there is a minting error, meaning that the coin design has not been stamped onto the coin correctly.

The most common error with these Slave Trade coins is where the inscription around the edge is printed upside down. It should be read upright when the face of the coin is at the top, rather than the heads side.

It is worth noting that this is not technically an error and is common across £2 coins; however, these rare coins are selling for upwards of £100.

An even rarer error is one that was confused with another commemorative £2 coin from 2007. The Acts of Union Between England and Scotland coin was also released in £2 with the inscription UNITED INTO ONE KINGDOM around the edge. Some Slave Trade coins were printed with this inscription by mistake.