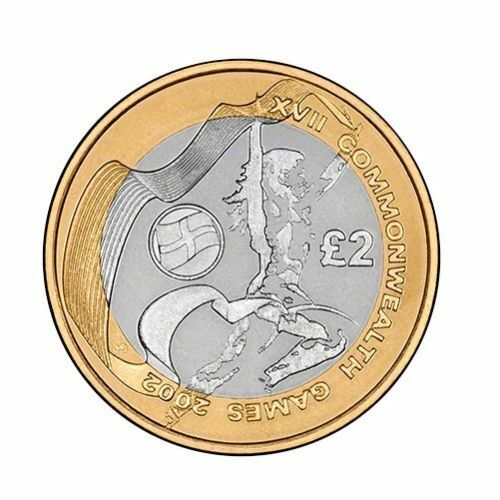 Rare and valuable 2002 Commonwealth Games £2 coins are always high on a collectors wish list. Available in a variety of conditions, this coin regularly makes an appearance.

Special £2 coins designed to mark the 2002 Commonwealth Games, held in Manchester, have become much sought after by collectors, due to their popularity and the fact only a small amount of each were circulated.

Four separate versions of the 2002 Commonwealth £2 were produced by the Royal Mint, each to represent the four competing nations of England, Scotland, Northern Ireland, and Wales. They can usually be found for sale sold separately or as part of a set, meaning if you look hard enough, you may find all four.

The reverse of the coin was created by Matthew Bonaccorsi, who won a competition with his design which represents celebration, victory, and sportsmanship. It shows a moving figure holding a banner above her head, which is divided into lines to represent the lanes of a swimming pool, it is inscribed with the words ‘Spirit of Friendship, Manchester 2002. The only difference in design is the small flag which appears on each £2, which represents the nation the coin has been made for.

The outer edge of this two-tone coin is made from nickel and brass, and the inner section is nickel and copper. The obverse of the coin is the portrait of the Queen by Ian Rank-Broadley, which has appeared on British coins since 1998.

The first £2 coin was issued by the Royal Mint in 1986 to commemorate the Commonwealth Games held in Edinburgh and was made in a single colour. The £2 coin came into general circulation in 1994, as the now familiar two-tone version, and commemorative £2 coins continue to be issued today.