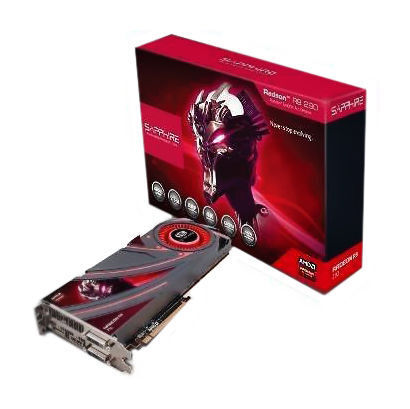 The AMD Radeon R9-290 video card is 24% larger than previous models. This allows it to pack more power without having to take up more space in your computer. It has over 6 billion transistors, meaning that this computer graphics and video card can handle much more tasks at any given time. Pick up your HD AMD R9 290 computer graphics video card from this range of computer components and parts to get stuck into your next computer project.

The R9 290 shares the same core as the R9 290X. The only difference is that some of the steam processors have been deactivated. The AMD Radeon processor comes with 2,560 processors that are all organised into 40 different computer units. It also has a core clock speed of over 947 MHZ and this is impressive to say the least. It has also been paired with 4GB of GDDR5.

The core is filled with transistors. It also has a generous memory bus. This ultimately means that it has a theoretical output of 4.84 TFLOP. The memory bandwidth is 320GB/s however it does have some older architecture. The graphics card has the ability to manage heat and power consumption and it also has an 8 pin power connector. The connector that you have will depend on the graphics card that you install, however it is more than possible for you to install new housing to accommodate for any new and upcoming designs.

The AMD Radeon R9 290 has the ability to accommodate a huge range of games and it also has the ability to really provide an HD experience, so you can experience all your favourite games in sharp focus. It is known for having very little lag as well, so if you are after a gaming experience that wont slow you down then this is a great option for you.