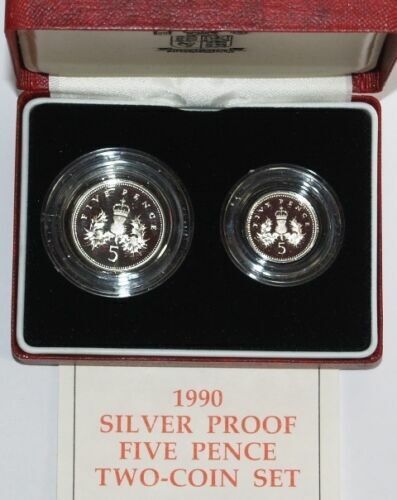 There are hundreds of 5p coins to choose from in collections and bulk lots, with a range of issue dates. You can find new and used 5p coins that are sold individually, with 5p coins from the Isle of Man and Jersey also available.

From 1971 to the present day, British 5p coins have changed in several ways. From their edge inscriptions to their size and material, here are some of the key features that make British 5p coins so collectable.

After decimalisation, the 5p coin size remained unchanged from its original 23.59mm diameter, until 1990 when it was replaced with a smaller version.

Portraits of the Queen

5p coins can be split into distinctive groups based on the portraits of the queen that have featured on their reverse. From 1968 to the present day there have been four different portraits: the Machin portrait featured from 1968 to 1984, the Maklouf portrait from 1985 to 1997 and the Rank-Broadley portrait from 1998 to 2015.

The Clark portrait is the fourth and was designed by engraver Jody Clark. It has been in circulation since 2015 with the reverse of the coin featuring a portion of the Royal Shield since 2008. 5p coins from 1990 to 2008 featured a thistle royally crowned, which was formally the Badge of Scotland.