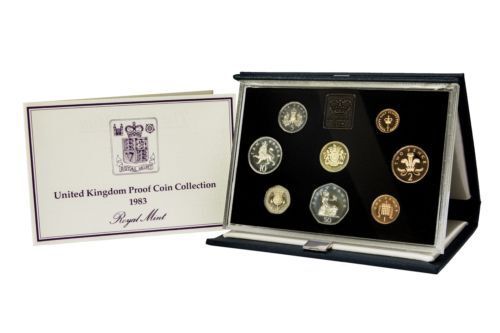 All British proof sets and coins are minted at the Royal Mint in London. Proof coins are coins that have been made to a higher standard of finish than regular coinage in general circulation. They are issued in limited numbers. Proof coins may be sold individually or in boxed sets.

Many proof coins and sets are produced to coincide with a special event, like the Queens Jubilee, the 2012 London Olympics or the Chinese Lunar New Year. Others commemorate the anniversary of historical events, such as the Fire of London, the Battle of Waterloo or the end of World War I.

Things to Look Out For When Buying Coins

Many numismatists (collectors of coins) prefer coins in the best condition possible. Mint condition refers to the state that coins are in when they leave the mint and therefore are almost perfect. If coins have been removed from their packaging or have been on display for a while, they may suffer from tarnishing or scratching. This may even be the case if coins are boxed or in a sealed packet. Generally, coins in a better condition will cost more. Many Royal Mint proof coins and sets are supplied with a certificate of authenticity (sometimes called a COA).

Proof coins and commemorative coins are often made from precious metals like silver, gold and platinum. Other UK coinage tends to be made using three main alloys: bronze, nickel-brass and cupronickel. All three alloys contain copper. In bronze copper is mixed with zinc and tin, in nickel-brass, its combined with zinc and nickel, and cupronickel is mainly copper with some nickel.

All UK coins are produced by the Royal Mint. The Royal Mint is owned by Her Majestys Treasury and has been circulating coins in the UK for over 1,000 years. As well as producing UK coinage, it mints coins for around 60 other countries too. UK banknotes are printed by the Bank of England.