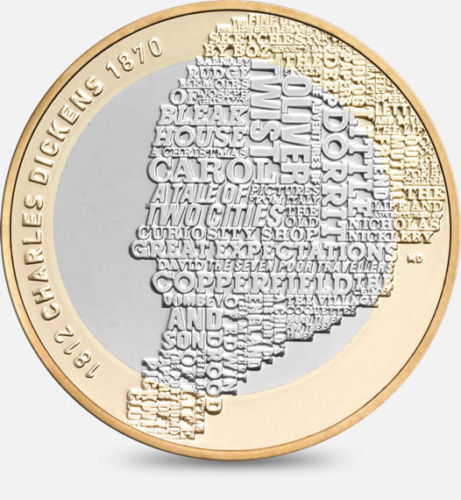 These special commemorative coins were launched back in 2012 to celebrate the 200th anniversary of the birth of famed British author Charles Dickens. The creator of classic novels like Oliver Twist, A Christmas Carol and David Copperfield is forever immortalised in this beautifully designed coin. The Charles Dickens £2 coin was designed by Matthew Dent and features a profile of Dickens face, cleverly formed from the words of his book titles. Its a unique mix of the traditional and the modern, and a fitting tribute to this great literary figure.

There are several different coin standards, all of which denote a different value and quality. The most prized and collectable of the uncirculated coins produced by the Royal Mint are proof coins. The die is carefully hand-aligned and coins are struck at least twice to create a well-defined image. This extra attention to detail means they fetch the highest price. Next, you have Brilliant Uncirculated (or BU) coins, which are created at the next highest level of quality. Bullion coins are the lowest quality of uncirculated coins.

Standard circulated coins are produced to a similar quality as Bullion coins, but they have been used as legal tender. That means they may have encountered knocks and scrapes, leading to chips, scuff and other imperfections. They tend to be the most affordable coins to collect. Always check the standard and condition of a coin with the vendor before you buy.

Some Dickens coins were issued by the Royal Mint especially as collectors items and include a certificate of authenticity and a presentation booklet full of interesting facts and stories about the man himself.

A small number of Charles Dickens coins were misprinted by the Royal Mint, a fact that may actually have made them more valuable and collectable.