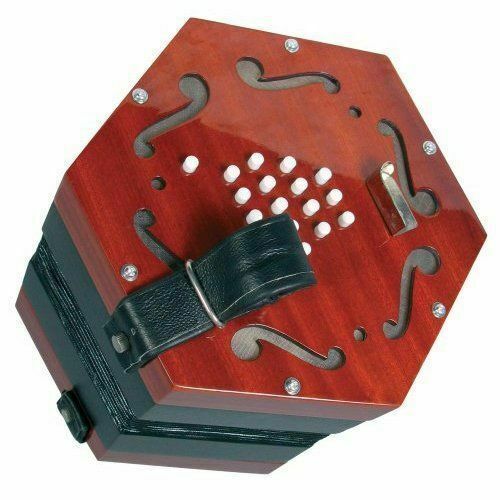 Provide the perfect melodious sound for traditional folk and classical music styles with new and antique concertinas for the budding and keen musician.

Among a wide selection of concertinas are new modern models as well as antiques and traditional styles such as the English concertina, Duet, German or Anglo concertina, which vary in their number and arrangement of buttons. An English concertina is described as unisonoric as it produces the same note when the button is pushed and drawn and the German and Anglo are bisonoric as they produce a different sound when the button is drawn or pushed. Anglo concertinas are designed as a hybrid of the original English and German concertinas.

Makes of antique concertina which can come up for sale include those by Louis Lachenal. He first made English concertinas for Wheatstone & Co in the 1840s and 1850s, before setting up his own business in the 1860s, which continued producing concertinas until 1836. A Lachenal English concertina will typically have 22, 24, 32, 40 or 48 buttons. The company also made Anglo concertinas and Duets, which have notes on both sides of the instrument.

Other well-known makes of concertina to look out for include Scholer, an East German make of Anglo concertina produced after the Second World War and MacCann, whose Duet concertinas were popular between the 1880s and 1930s; and Hayden, a modern maker of the Duet system. Instruments from concertina specialists Clinkscale can regularly come up for sale, such as its Stephanelli 30-note or 20-note Anglo.

Whether you are a beginner or a professional, you will be able to find a concertina to suit your needs and style.