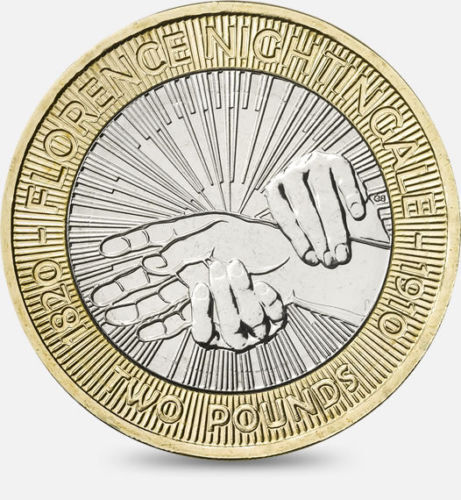 The Royal Mint produced two limited edition versions; a silver proof coin for collectors and a regular version that went into general circulation. Both weigh around 12g and are 28.4mm in diameter. The edge inscription says ‘150 YEARS OF NURSING.

The front features a profile portrait of the Queen by Ian Rank-Broadley. The back shows two sets of hands, one checking the others pulse. It was illustrated by Gordan Summers, Team Leader and Engraver at the Royal Mint.

Only 5,117 silver proof £2 Florence Nightingale coins were issued. Its minted in sterling silver and the outer ring is covered in 24-carat gold leaf.

Proof coins are made to a higher standard than coins that go into general circulation, and a mint condition Florence Nightingale coin is a beautiful item for anyones coin collection.

A commemorative £2 coin was also produced for general circulation. Only 6,175,000 were minted. This may sound a lot, but it is estimated that there are over 950 million £2 coins in circulation, so the chances of finding one in your change are fairly low.

Other Valuable £2 Coins in General Circulation

There are other valuable £2 coins in circulation. The rarest is the Northern Ireland £2 commemorating the 2002 Commonwealth Games. Only 485,500 were produced. The Welsh, English and Scottish versions of this coin are also fairly sought after. Other rare £2 coins include the 2015 First World War Centenary (Navy), the 2016 Great Fire of London and the London 2012 Handover.