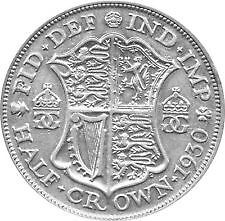 The English penny is believed to have first appeared as a coin in Anglo-Saxon times, however, it wasnt mass produced for general circulation until the late eighteenth century.

The pre-decimal penny was worth 1/240th of a pound in British money and was updated at various points in history to bear the portrait of the reigning monarch. The George V penny was widely produced during King George Vs reign from 1910 to his death in 1936.

If youd like to add a George V penny to your coin collection, youll find thousands of options to choose from. A range of collections and bulk lots are available and feature either several George V pennies or a range of coins from his reign.

Subsequently, production continued as normal, until 1933 when just seven George V pennies were minted. While these are the rarest George V pennies in existence, youll find a wide selection of highly collectable reproductions available from this year.

One side of the George V penny features a seated figure of Britannia, with a trident in the left hand and a shield bearing the Union flag in right, while the reverse has a portrait of King George V. Its widely believed that the size of the monarchs head was made smaller on George V pennies produced between 1928 and 1936.