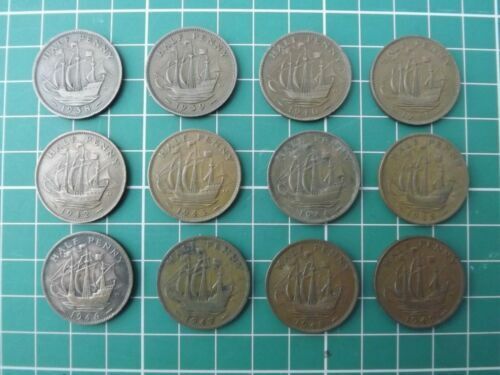 A piece from every era, add some early 20th Century history to your coin collection with George VI half-penny coins from 1936-1952.

Following the abdication of his brother King Edward VIII in 1936, George VIs reign saw the British Empire dismantle and transform into the Commonwealth. Although his reign began in 1936, the first of his pennies were minted in 1937 and the last in 1952.

Each half-penny coin that was minted during George VIs 16-year reign features the same design. On the reverse, Sir Francis Drakes galleon ship the Golden Hind is depicted with the words HALF PENNY inscribed above.

On the observe is the bear head of George VI, which is facing left. Both sides were designed by Thomas Paget.

As the coins from each year of George VIs reign are not very rare, they dont cost much to collect; however, you may have to pay a little more if youre looking for one in a really good condition.

Because the coins are so easy to come by, it is much easier to collect a half-penny from each year of George VIs reign, especially if you are particularly interested in British history from this time.

A lot of collectors enjoy memorabilia from this time as Georges reign was an interesting one. He was thrust into the position following the abdication of his elder brother. Considering that he never believed that he would need to take this position, George VI embraced his role as king and his reign saw many events worth their historical place in time.

For instance, his kingdom lasted during the difficult time of WWII, during which time he became the first British monarch to enter the US as well as visiting several battle fronts.

King George VI was much admired as the monarch during this wartime and, as such, proves popular among collectors.