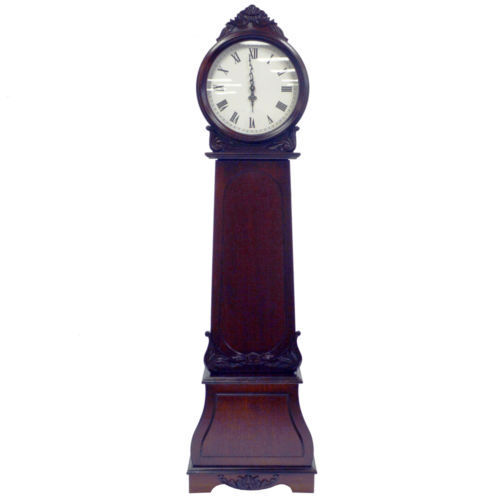 Grandfather clocks are more than just timepieces or items of furniture. They are often heirlooms that have been passed down through generations of a family. Grandfather clocks are also known as longcase clocks or floor clocks. They tend to be six to eight feet tall (1.8-2.4 metres) and made of wood, such as oak or mahogany.

Grandfather clocks have a long pendulum and either one or two weights that drive the pendulum. The pendulum and weights are housed in the tower (or main body) of the clock and are visible if the door is glazed. These clocks require winding regularly, usually, this is done with a key. How often you need to wind them depends on the movement the clock has.

How you wind the clock will depend on whether its cable or chain driven. Cable-driven clocks are wound by a key and chain-driven require you to manually pull up a chain.

Westminster is the most well-known grandfather clock chime and the historical equivalent of that famous Nokia ringtone. Its the chime associated with Big Ben and is taken from Handels ‘I know that my redeemer liveth. Other chimes include Ave Maria, Whittington and Beethovens Ninth Symphony.

The numbers on the clock face are Roman numerals and measure hours and minutes. Some grandfather clocks may also include features like measurement of dates and seconds. The face is often made of embossed or painted metal, and many feature some decoration too. Some painted clocks feature delicately illustrated pastoral scenes. Often clock faces feature the Latin ‘Tempus Fugit which means ‘time flies.