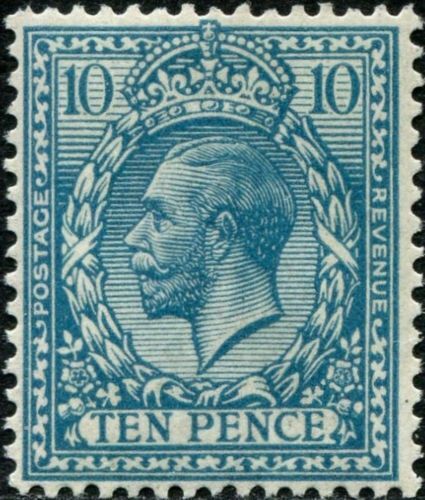 In Great Britain, George V stamps were issued during King George the Fifths reign. George V was King between 3 June 1865 and 20 January 1936. He was the son of King Edward VII and the grandson of Queen Victoria. King George V was a keen stamp collector himself and president of the Royal Philatelic Society between 1896 and 1910.

Although the worlds first postage stamp, The Penny Black, was introduced in the UK in 1840, during George the Fifths reign, there were a number of other philatelic firsts. The first ‘postage due labels were produced in 1914 and the first commemorative stamps in 1924. The first stamps printed by photogravure were also produced when George V was King.

In 1924, the first ever commemorative UK stamps were produced. They celebrated the British Empire Exhibition in Wembley and featured a lion on the left and the Kings profile on the right. Two stamps were issued, the red one penny and the brown three halfpence.

One of the most collectible George V stamps is known as the Seahorse. These stamps were first issued in 1913 and feature the King on the left-hand side and Britannia with three horses on the right. Four stamps were issued: the brown half crown (2s 6d), the red five shilling, the blue ten shilling and the green one pound.

Stamp listings may describe stamps as mint, MNH (mint never hinged), hinged and used. Mint refers to stamps that are in the same condition as when they left the printers. Hinged or never hinged refers to whether stamps have been in contact with stamp hinges.