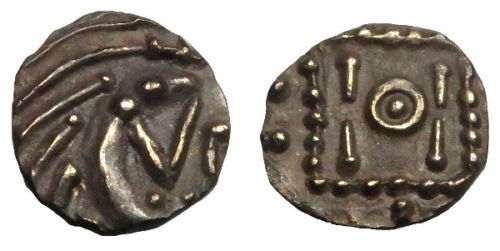 When the Romans left Britain, the use of coins in the country discontinued until the rise of kingdoms in A.D 600. Each British coin was hammered and hand-stamped by chosen mints, with each telling who made the coin, when and where it was made, along with the bust of the current king of the kingdom it was made in.

In this range, youll find loads of amazing examples of British hammered pre-c. 1662 coins from the Anglo-Saxon era that would be perfect additions to any historical coin collection.

Copied from the late ancient Roman coin solidi, Anglo-Saxon coins began production in the seventh century. The early coins were named tremissis or thrymsas and made of gold and, rather than being used for currency, they were used as decoration by kings and rich nobles to show importance and wealth.

As there were only a few of these coins ever produced, they would make an amazing centrepiece to any Anglo-Saxon coin collection or a collection of rare coins.

Common folk began using coins as a form of currency in the eighth century when the silver coins named sceattas and bronze or brass coins named stycas came into circulation. Lower value coins like the stycas are much more common than sceattas and tremissis, making them easy to find and add to your collection.

As each coin was hammered by hand, they are all unique pieces of the past. You might come across some coins that have mismatched designs, or coins with off-centre designs, creating a really interesting piece to add to your collection.

Due to the nature of the way coins were made in the seventh to eleventh centuries, and the nature of the currency system, coins would often be cut in half or quarters to pay for something. This means that fractioned Anglo-Saxon hammered coins are common finds, and a really interesting conversational piece to add to your collection.