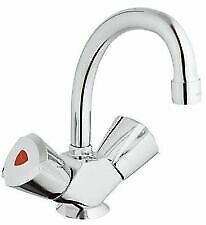 Kitchen taps to update your kitchen

The finishing touches of any kitchen will set it apart, especially with something that looks polished and perfect. Kitchens are much more than a cooking space these days, theyre also the hub of the home. Any interior designer will tell you that a great finished look comes down to pulling together all the details, and your kitchen taps have more than a functional purpose in the overall design. By checking out your options on eBay, you can find the best taps to complement your kitchen.

Thinking about how you want your kitchen taps to function, but also how you want them to look will determine what type you opt for. You may want to look for certain practical features, such as choosing a kitchen mixer tap, or a thermostatic model. Other types of kitchen taps have benefits like water saving mechanisms, swivel spouts, or pull out hose sprays. Each has their own uses and advantages, and a keen cook, in particular, may have a preference when it comes to selecting something that makes their job easier.

If you have a particular style or theme to your kitchen, details like your kitchen taps can be used to add to the style of decor, or they can be used as a bold stand out feature. A Victorian style kitchen with a modern, clean edged tap would stand out with its bold lines and chrome finish. Overarching styles to look out for include antique, modern, traditional and Victorian.

Finishes include design aspects like the material the tap is made from, colour, and any effects. You can find kitchen taps in brass, bronze, copper, or nickel. Or, if you want something that looks more modern, white, stainless steel, and chrome kitchen taps are an option. Thinking about how this ties into the style and type of tap are the key to bringing everything together.