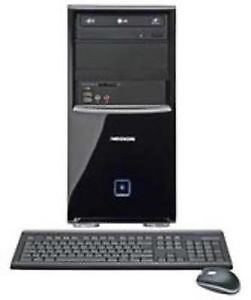 Medion PC Desktops and All in Ones

Medion produce a range of computers for home and small business use. Medion desktop PCs and all in ones are available in a range of different capacities, so you can choose the type that will be best for your requirements.

Whats the difference between a desktop PC and an all in one?

Desktop computers are the actual computer itself, usually in the form of an upright tower case or a horizontal casing that sits on the top of your desk. You will need to plug in a monitor screen to be able to see what youre doing when using a desktop computer.

Some types of Medion desktop and all in one computers

One of the main differences between the types of Medion desktop computers on offer is their hard drive memory capacity. This is measured in Gigabytes or Terrabytes (Gb or Tb), with the higher the amount of hard drive memory, the more programs and files you can store on your machine. Medion hard drive memory ranges from 128 Gb to 2 Tb and beyond at the higher end.

RAM memory is a measure of how quick and powerful your Medion computer will be, with a range of sizes from 2Gb to 16Gb and higher, with the higher numbers relating to a machine that is faster and more powerful.

About the Medion brand

Medion was founded in Germany in 1982. They produce a range of consumer electronics equipment, including desktop and portable computers. The Chinese company, Lenovo, bought the Medion brand in 2011, with Medion still operating as an independent division within the company.