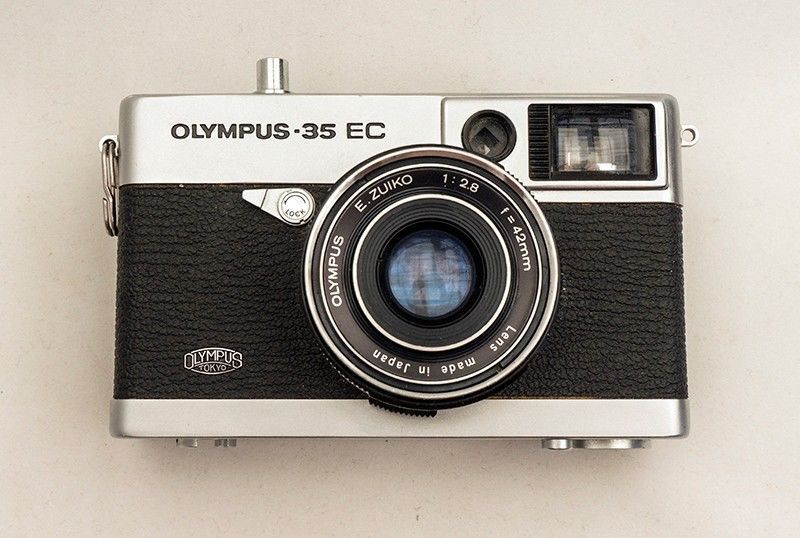 An excellent choice for photography students, photo hobbyists and serious camera collectors, Olympus vintage 35mm cameras are available across a range of models including compact, SLR and rangefinder cameras . All of these styles of camera are highly functional, extremely portable and lightweight cameras, which you can wear close to hand to capture photo opportunities while on the move.

First introduced in 1967 and manufactured until the mid 1980s, the Olympus Trip 35 is probably one of the most popular Olympus vintage 35mm cameras of all time. Launched to great success, this fully automatic compact 35mm fixed lens camera was made famous back in the 1970s for the Japanese brands advertising campaign that featured renowned British celebrity photographer, David Bailey.

The Olympus Trip 35s main appeal, then and now, is that it is a compact, tough and easy to use camera which takes super sharp, well exposed pictures. Sought after by many photo enthusiasts today, its surprisingly lightweight metal (black and chrome) camera body houses high spec superbly functional inner workings.

Significantly, the Olympus Trip 35 operated completely without batteries, with its light meter and programmed automatic exposure system being entirely solar powered, which was state of the art quality at the time of its release.

Olympus OM system cameras widely regarded as among the best Olympus cameras ever. This line of SLR (single lens reflex) cameras was produced by Olympus between 1979 and 2002, and was typically manual focus only.

The width of an Olympus OM system cameras lens mount meant that a wide and varied range of lens could be attached to the camera, from standard prime lenses to ultra-wide angle, zoom and tele-photo options. This range of Olympus vintage cameras has a solid build quality, uncluttered controls and versatility of use which still produces stunning end results.

If you are looking to build up your photography kit bag many Olympus vintage 35mm cameras can be purchased together with other items such as extra film, lenses, cleansing kits, carry cases and wrist or neck straps. In addition, if you are a camera enthusiast looking for a vital part for an existing Olympus camera body, several non-functioning Olympus vintage 35mm cameras can be purchased specifically for spares and repairs.

The very first Olympus camera was released in 1936 and was called the Semi-Olympus I. The brand followed to launch its first series (the Pen) in 1959.