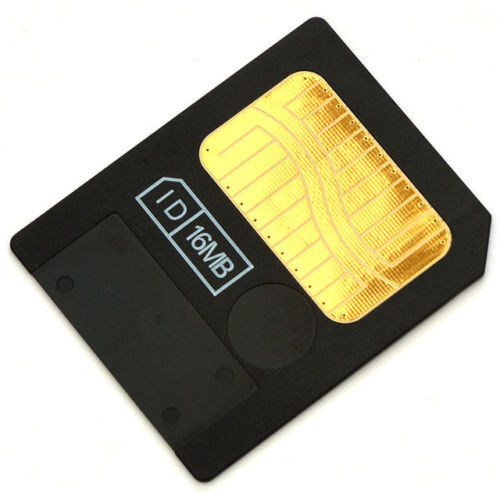 A SmartMedia card was originally known as a solid state floppy disk card (SSFDC) that used flash memory to store data. It is suitable for use with digital cameras , PDAs and other handheld devices.

Larger than an SD card or MultiMediaCard, but a similar size to a CompactFlash card, they have a storage capacity up to 128MB and consist of a single NAND flash memory chip connected to a plane electrode by bonding wires, which are embedded into a resin casing by a process called Over Molded Thin Package (OMTP).

Some higher capacity SmartMedia memory cards have multiple linked chips. The module is glued to a card base and when it is inserted into a device, the electrode carries the power and data to the flash memory chip.

There is no on-board controller as compliant devices carry a built-in controller within the card slot. This means that the card can carry out automatic wear levelling which prevents early wearout of a sector by mapping the writes to other sectors in the card.

The main advantage of SmartMedia memory cards is that they can read, write and delete memory in small blocks of data, allowing for greater accuracy when you are selecting which data to save. However, the cards are not as robust as other formats and need more careful handling.

SmartMedia memory cards can be used in a 3.5" floppy drive when used with a FlashPath adapter, making it the leader in getting flash memory functionality with old hardware. They were available in two formats, 5 V and the 3.3 V which indicate the cards main supply voltage. An oversized xD-to-SmartMedia adapter enables xD cards to use a SmartMeter port, but it will not fit into a SmartMedia slot completely.

A copy protection feature, called ID, is included, giving each card a unique identification number for use with copy protection systems. However, SmartMedia cards were often corrupted and became unusable when the card has been read/written in a card reading device. If the corrupted card is put back into the camera, you will not be able to format the device, nor read or write to the card.

Some modern laptops and desktops have built-in SmartMedia reader slots and most multiple card readers include this format, but the more favourable memory format today is either a MicroSD card or a Memory Stick Micro, due to their small size and reliability.