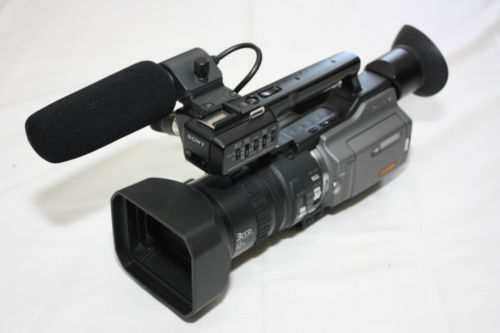 DV and HDV format camcorders are designed to store digital video. Some video camcorders were able to switch between the two recording modes.

Sony DVCAM format camcorders are tapeless by design. They record video on memory cards , hard disk drives or optical discs, depending on your preference.

DV uses Iossy compression of the video but audio is uncompressed. An intraframe video compression scheme compresses the video frame by frame using the discreet cosine transform (DCT) capability. It uses interlaced scanning with a luminance sampling frequency of 13.5MHz, resulting in 480 scanlines per frame for the 60 Hz system and 576 scan lines for the 50 Hz system.

Before DCT compression takes place, chroma subsampling is used on the source video to reduce the data to be compressed. However, low chroma resolution of DV is sometimes avoided in chroma key applications, although recent advances in technology have improved this process. The audio, video and metadata is stored in Digital Interface Format (DIF) blocks which are the basic units of DV streams and can be stored as computer files.

Sonys version of DV has the same compression process but they have made their camcorder more robust with improved linear editing capabilities, colour rendition and raster size. The DVCPRO Progressive variant is recorded to tape within an interlaced video stream. Film-like frame rates can be generated by using a pulldown, and the HD version supports a native progressive format when recorded to P2 memory cards.

The DVCAM camcorder version of the DVCPRO uses locked audio to prevent any audio synchronisation drift that can occur on DV when several copies are made. The DVCAM uses 15µ track pitch when recording to tape which is 50% wider than baseline. This means that tape is transported 50% faster and reduces recording time by a third in comparison to regular DV. Due to the wider track and track pitch, DVCAM is able to carry out a frame-accurate insert edit.

Sony DVCAM camcorders feature a USB port for connecting to computers and the transfer of still images, but it is not possible to transfer videos as they dont deliver full DV quality, with the exception of the Sony DCR-PC1000 camcorder.

Designed to deliver optimum sound and visual performance, a Sony DVCAM is Ideal for recording footage in both leisure and professional settings.

A wide range of add ons and accessories are available to help you get the most out of your camcorder, from microphones and on-camera lighting to handy battery packs, chargers and carry cases.