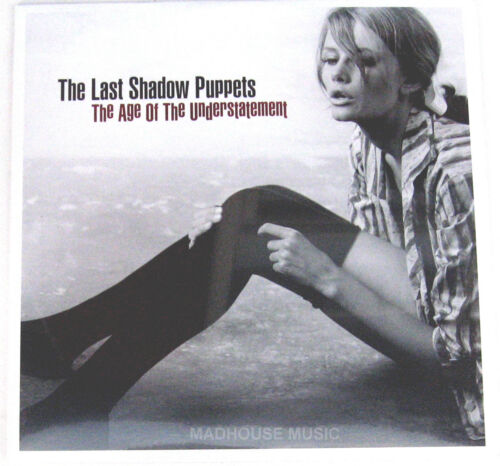 Have one to sell?
Sell it yourself

Registered as a business seller

Report this itemopens in a new window or tab

Product Identifiers
Record Label
Domino
EAN
5034202020813
eBay Product ID (ePID)
6052271961
Product Key Features
Artist
The Last Shadow Puppets
Era
2000s
Format
Record
Release Year
2008
Language
English
Features
Studio Recording
Release Title
Age of the Understatement
Type
Album
Genre
Pop, Alternative, Rock
Additional Product Features
Reviews
3 stars out of 5 -- "While reverb-swathed acoustic guitars churn in minor keys against a backdrop of swooning strings, Turner croons midnight-of-the-soul confessions...", 4 stars out of 5 -- "It's a sumptuous record of drama and escape, mystery and romance. The two co-frontman sing in harmony over great swathes of velvet strings...", "Their debut boasts galloping rhythms and vibrato guitars...and lovely orchestrations that call to mind pop-melodrama king Scott Walker.", Ranked #2 in Mojo's "The 50 Best Albums Of 2008" -- "The songs were lifted above pastiche, to plant bittersweet 21st century tales onto sweeping symphonic canvases.", 3 stars out of 5 -- "Excellence is everywhere. On the whole, THE AGE OF THE UNDERSTATEMENT seems to be located in a twilit cityscape, awash with romantic disaster...", Ranked #40 in Clash's "The 40 Best Albums of 2008" -- "Grandly dramatic, warm, romantic and funny, THE AGE OF UNDERSTATEMENT is hopefully the first of many albums from the Puppets."
Distribution
Integral/Cinram Novum
Additional Information
With help from the London Metropolitan Orchestra, Alex Turner and Miles Kane revitalize the lavish late-'60s/early-'70s sound of lush symphonic pop.
Country/Region of Manufacture
England

The buyer is responsible for return postage costs.
Most Buy It Now purchases are protected by the Consumer Rights Directive, which allow you to cancel the purchase within seven working days from the day you receive the item. Find out more about your rights as a buyer and exceptions.

Questions and answers about this item

No questions or answers have been posted about this item.
Ask a question - opens in a new window or tab
Seller assumes all responsibility for this listing.
eBay item number:373450747843
Last updated on 16 Sep, 2022 10:28:10 BSTView all revisionsView all revisions

Seller collects sales tax/VAT for items dispatched to the following states:
*Tax applies to subtotal + P&P for these states only

Feedback on madhouse319 from others who bought this item